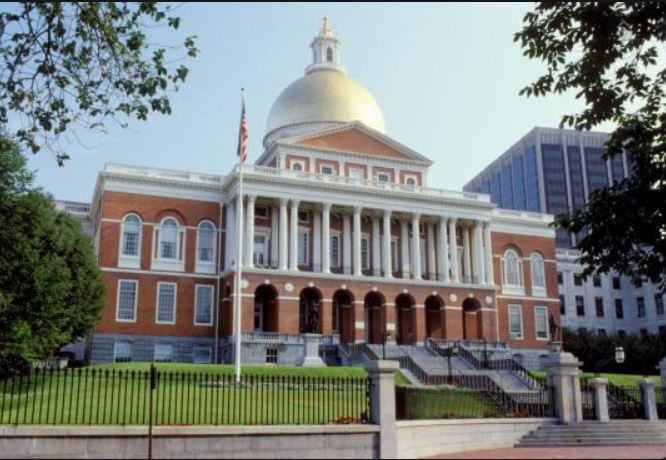 BOSTON, JULY 15, 2020.....About a dozen House lawmakers joined climate and environment advocates Wednesday morning to drum up support for a bill that would require the executive branch to prepare a formal plan to reach the shared goal of net-zero carbon emissions by 2050.

Gov. Charlie Baker, House Speaker Robert DeLeo and Senate President Karen Spilka this year each declared their support for net-zero carbon emissions by 2050, a policy that climate activists have long been pushing. Both branches have passed climate bills but the 2050 target still hasn't been formalized by the Democrat-controlled Legislature with time set to run out on the session in two weeks, unless lawmakers waive their own rules.

"I personally think it's the best bill that is in the Legislature right now," Rep. Smitty Pignatelli, House chairman of the Environment, Natural Resources and Agriculture Committee, said of Rep. Joan Meschino's bill to require a 2050 emissions reduction roadmap.

Meschino's bill (H 3983) would codify the target of net-zero emissions by 2050, require the establishment of interim 2030 and 2040 targets, require the Baker administration by the end of 2021 to file a plan detailing how Massachusetts can meet the 2050 target, and require that the plan be updated every two-and-a-half years. The bill was reported out of Pignatelli's committee favorably almost a year ago and has been in the House Ways and Means Committee since.

"We're all well aware of the climate crisis. The issues present as public health, public safety, environmental justice, environmental health, social justice. However, the solution is an economic one. It is the decarbonization of our economy," Meschino said during a virtual rally hosted by 350 Mass, Conservation Law Foundation, Mothers Out Front, Elders Climate Action Massachusetts and others. "And if we're going to accomplish those goals, then we need a plan. And that is why I filed this bill. I filed the 2050 roadmap because we need a plan to achieve our goals."

The 12-year-old Global Warming Solutions Act requires an 80 percent reduction in greenhouse gas emissions compared to 1990 levels by 2050, but the Baker administration is already working on its own roadmap to reach net-zero emissions by 2050 with the help of "experts and stakeholders," the Executive Office of Energy and Environmental Affairs has said. The administration intends to release its plan to meet the state's carbon reduction goals by the end of this year.

Meschino said she thinks of her bill as making a series of critical updates to the Global Warming Solutions Act and noted that Baker's energy and environment secretariat "has begun to do some of the work around the backcast analysis," in which the schedule of emission reductions is detailed and then paired with the strategies proposed to achieve them over time.

Though the bill is in the House Ways and Means Committee, Pignatelli advised advocates to focus their lobbying efforts on DeLeo and Rep. Tom Golden, the chairman of the House Committee on Telecommunications, Utilities and Energy who is spearheading a review of climate and environmental bills.

"I think that's where these decisions are going to be made," he said.

And though formal sessions of the Legislature are currently due to end after July 31, Pignatelli said he expects that lawmakers will get another crack at passing climate legislation and other bills later this year.

"Everything has been kind of thrown off the rails, like I said. We normally would be done by the end of July. I truly believe that we will be called back into session sometime this fall. We don't even have a state budget at this point. So, under normal circumstances, we'd all be scrambling for the last two weeks of this session to get this bill across the finish line. I still would love to see that happen on Joan's bill," he said. "But if it doesn't, I don't feel any of us should feel the collective, 'oh my God, we lost another time.' So I think that the advocacy should continue, whether it's the next two weeks, or the next few months."

Legislative leaders haven't announced plans to attempt to extend formal sessions, although at this point it appears nearly impossible for the branches to pass an overdue annual budget through both branches this month.

Rep. Michelle Ciccolo of Lexington said that Meschino's 2050 roadmap bill is one of the top 10 bills that she would like to see get across the finish line this session, whether the vote comes before July 31 or sometime between August and January.

"Toward that end, I've been sending letters and emails to [House] leadership, making phone calls and actually asking them to look at extending the session," she said Wednesday. "I'm fully in favor of us coming back after the election, after the primaries, staying late into August, whatever it is that we need to do to make sure that we get this across the finish line."

Rep. Kay Khan, chairwoman of the House Committee on Children, Families and Persons with Disabilities, said she would be happy to raise the subject of Meschino's bill with both DeLeo and Golden.

"I think that carbon neutrality by 2050 is within our reach and it is our responsibility to our children -- and I'm lucky enough to have seven grandchildren and I think about them every day and the importance of moving forward and to get this done -- and the roadmap bill lays out a very big yet promising goal and path ahead," Khan said. "It is designed to accelerate our progress toward net-zero emissions by pushing us to exploit and explore all possible avenues toward reaching that goal, and the time is now."

Climate legislation had figured to be a central focus of the legislative session's home stretch since the House and Senate had each passed major climate-related bills before most business was put on pause.

The House last July approved a roughly $1.3 billion bill -- the so-called GreenWorks bill -- centered around grants to help communities adapt to climate change impacts, and at the end of January the Senate overwhelmingly passed a suite of climate bills that called for net-zero carbon emissions by 2050, and set deadlines for the state to impose carbon-pricing mechanisms for transportation, commercial buildings and homes.

Golden has said that the House "is eager to move forward" on climate legislation, and he and his Senate counterpart, Sen. Michael Barrett, are in agreement that the Legislature ought to pass a climate bill into law by the end of 2020.

"The House of Representatives has taken an approach for some time with GreenWorks," Golden said at the end of June. "I'm looking forward to working with Senator Barrett on moving our vision as well as the Senate's vision towards a final, rectifying a final piece of legislation. I think it's vitally important that we finish this before 2020 ends."